It began in 1735, when homes and businesses were primarily built out of wood and heated by fire. Real estate was more important than lawns and parks in the era’s growing industrial cities, so most buildings were constructed close together. This meant when one building caught on fire, the others often did as well.

Ben Franklin recognized the need for groups of people to be trained to fight fires together. But the people fighting the flames soon realized the equipment they used was just as important as the firefighters using it.

You may have heard the term “bucket brigade.” Every resident in Colonial America had a leather bucket they kept by the front door for quick access when a fire broke out. Each leather bucket had the family name and address painted on it for easy retrieval after the fire.

When they heard someone shout “FIRE!” residents knew to grab their bucket and run toward the flames. A line of residents would be established between the fire and the nearest water source. At one end, a resident filled buckets and passed them down the line. At the other end, residents were ready to use the water to put out the fire.

This strategy didn’t necessarily mean they would save the house. At best, their efforts might slow the progress of the fire, allowing homeowners to salvage their possessions before the house was consumed.

A Dutch inventor, Jan van der Heyden, was the designer of the first widely used fire hose. He and his son sewed leather strips together into tubes. These tubes were made in 50-foot lengths, a metric that is still used today in modern hose manufacturing. These tubes were hooked to water sources, allowing firefighters to get more water to the fire quicker.

In the early 1800s, cisterns, tanks, and hydrants were invented, along with nozzles and attachments, making the force and flow of water even greater. These improvements would continue over the years, leading to the technology of today.

As fire units and departments were being established, Jacobus Turck invented the first fireman’s helmet. It was constructed out of heavy leather, with a wide brim and high crown. While this didn’t offer protection the firefighters needed from falling debris, it was an improvement. In 1836, Henry T. Gratacap took Turck’s design and improved upon it, reinforcing the crown and other aspects. Many of the helmets firefighters use today are based on Gratacap’s original design.

The need to extinguish fire came about the same time man discovered how to make it. This has been recorded by prehistoric cave drawings.

Around 300 B.C., the first story of the mechanical pump was recorded. From there, civilizations around the world would adopt similar equipment and practices. This technology would not change for hundreds of years.

By 1736, the Union Fire Department in Colonial America was established, in part because of Ben Franklin’s efforts. Seven years later, the first fire truck was built. It was crude and horse-drawn, but it was considered monumental progress at the time. This allowed the firefighters to reach a fire faster.

In 1799, the first ladder truck was invented. This allowed firefighters to reach second- and third-story structures. However, getting enough water pressure to impact the flames remained an issue.

In 1829, the first steam engine fire truck was invented in London. After that came a steady stream of improvements.

From here, the fire truck would experience immense growth. Today, fire trucks can be equipped to fight any size of fire, and they are also used as rescue vehicles for many types of emergencies.

Related Post: What Are the Different Types of Fire Apparatus?

According to Smithsonian Magazine, the breathing apparatus and other necessary equipment weren’t invented until the 1790s, more than 50 years after the first official fire truck.

In the early formation of the fire department, volunteer firefighters had to use whatever gloves and boots they had, usually leather and cloth. Today, firefighters wear knee-high boots made of heavy rubber and gloves reinforced with kevlar and other fire-resistant materials.

Today, Jon’s Mid America Fire Apparatus refurbishes and sells state-of-the-art fire engines and rescue tools, just as we have for over four decades. We like to think that Benjamin Franklin would approve. 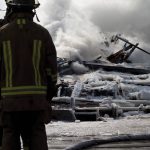 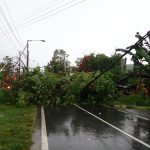