The History of the Fire Fighting Pump

When it comes to fighting a fire, every tool can make the difference between life and death. Firefighters have worked for centuries to find the best tools to extinguish a fire as fast as possible to save the most lives.

The fire pump system is a perfect example of a tool created to improve the capability of a fire department. By allowing for more water pressure at the scene of a fire, pumps have helped resolve dangerous situations created by fires.

How were pumps first formed, and how have they grown over time? Let’s go over the history of the fire truck pump and its applicability in modern firefighting.

The need for firefighting as been around as long as there has been modern civilization. As soon as homes were made of flammable materials, it became necessary for fire control to be a part of society. However, the first story of the mechanical pump began in 300 BC, and later became used in civilizations like the Roman Empire and European countries.

Later, around 400 AD, the popular style was a syringe piston pump, which was greatly limited in its angle of attack and range. Interestingly, from 400 AD to 1600 AD, there were no recorded changes in the design of fire fighting pumps! Then, in 1616, a single-cylinder single-acting piston pump was developed, increasing the ability to discharge water at a fire. It wasn’t until the early 18th century that pumps started to become mobile, adding to their ability to reach new areas during a fire. Not only were they limited by their mobility, they were also held back by the manpower required to use a pump – at least six men were needed for a pump to be effective.

The evolution into steam power

As more high-rise buildings began to exist post-Industrial Revolution, the need for better fire truck pumps increased. Older pumps were made to work for residential and low-rise fires, so reaching these new heights was a challenge. In order to fight these new fires, changes would need to be made.

The invention of steam power was a brilliant innovation to the field of firefighting. No longer were pumps powered by hand, but This allowed for more power to the pump, requiring fewer firefighters to be on scene and allowed for fires to be fought quicker and more efficiently than ever.

Today, pumps are made of two parts: the pump itself and the driver. The driver, which powers the pump, can be fuelled by either diesel or electric. Though the days of using steam power are long since gone, it was an important step in the modern fire pump systems that we see today.

Thanks to the continued evolution of fire fighting pumps, fires can be extinguished both rapidly and safely, preserving the lives of firefighters and those of fire victims.

Do you have questions about fire truck pumps? Reach out to us at Jon’s Mid America.

Our experts are there to help you understand all you need to know about a fire apparatus. 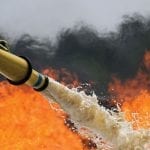 Why Your Department Should Utilize Class B FoamFirefighting 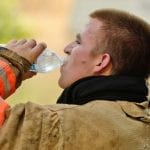