Keep Your Department Secure With These Aerial Lift Safety Tips

Aerial fire apparatus are amazing, powerful tools for any fire department. Being able to reach new heights to fight fires or to rescue someone is an incredibly helpful asset. With this ability, however, comes danger if not handled properly. From falling off, electrocutions, falling objects, structural collapses and more, there are countless ways aerial platforms or ladders can cause serious injury or death.

This doesn’t have to be the case, though. Proper aerial lift safety ensures no one gets unnecessarily hurt on the job.

Let’s go over some ways to keep safe the next time you’re on an aerial.

The National Fire Protection Association has set standards that mandate ladder belts for anyone who is on an aerial. Ladder belts should be tethered to a sturdy part of the aerial any time the aerial is in motion or while entering or exiting a platform. Ladder belts can be no longer than 24 inches in order to prevent a user from falling far out of an aerial. Safety harnesses should also be utilized to keep users safer.

Though ladder belts can prevent a catastrophic fall, they can’t keep you safe indefinitely. Dangling from a safety harness for too long can lead to death due to loss of circulation. For this reason, never operate an aerial by yourself. Every time an aerial is in use there should be at least two people to allow for proper rescues.

The famed phrase “an ounce of prevention is worth a pound of cure” rings incredibly true when it comes to aerial lift safety. Being able to prevent a disaster before it happens should be a goal for every department.

In order to be able to detect a problem, anyone who uses an aerial ladder truck or aerial platform should know it inside and out. Departments should share manufacturer safety manuals for aerials freely, and those who use the aerial should always be brushing up. Keep a brief safety manual in the apparatus itself in case of an emergency as well.

Inspect your aerial before every use. When it comes to the case of life and death you can’t be too careful. The Occupational Safety and Health Administration suggests checking these components every time:

Operating an aerial may be a challenge even in perfect weather. When conditions worsen it can quickly become incredibly dangerous. Manufacturers should have specific standards for your aerial fire apparatus, but there are a few general safety guidelines that should be followed regardless of aerial.

Be smart about your safety

Working in a fire department means being willing to answer the call to help others, even if that means facing danger. Fires and rescues can be plenty dangerous on their own, so it’s important to minimize that risk wherever possible.

Always speak out if you see something that seems unsafe on an aerial ladder truck or aerial platform. Ignoring a problem won’t make it go away and only increases the risk of more problems down the road. Practicing proper safety procedures are essential to keeping a department running smoothly and without issue.

If you’re in the market for an aerial ladder truck or aerial platform, contact Jon’s Mid America. Our high quality apparatus are sure to fit your standards for safety. 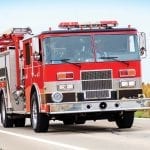 What to Consider When Buying a Rural Fire TruckFire Trucks 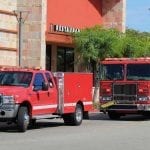 Should Your Department Consider a Mini Pumper?Fire Trucks