Emergency Vehicle Lights: Should You Choose Strobe, Halogen, or LED?

Halogen bulbs are the closest thing to a traditional light bulb. They work by using halogen gas to ignite a filament, which lights up the bulb. They are the oldest bulb of the three and have been used in emergency vehicles the longest.

Strobe lights are flash tubes that are filled with the gas xenon and require a power source to work, usually a capacitor. When the xenon is ionized by the electric components in the tube, it produces a plasma that is seen as a bright flash.

LEDs are light emitting diodes that work with driver electronics to produce a bright light. LED light comes in a variety of colors and is by far the most popular light used in emergency vehicles.

Ultimately, the benefits of LEDs outweigh any risk. Especially since most emergency vehicles are transitioning to LED, it would benefit your department to adapt sooner rather than later. If you’re looking for an energy-efficient, long-lasting solution to your emergency vehicle, look no further than LED lights. 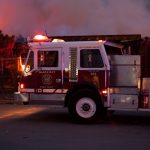 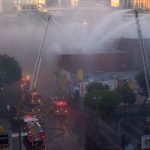 Straight Ladder vs. Aerial Platform: Which is Right for Your Department?Fire Trucks